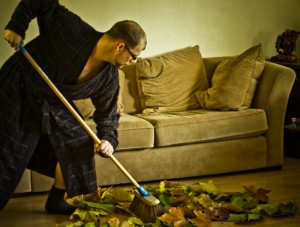 This week I will be preaching on the first miracle of Jesus, when He turned the water into wine.  It is a fascinating miracle and an intriguing story.  I find that with all the miracles of Christ.  They are individualistic, fascinating and intriguing in their own way.  I am not going to write about that first miracle, since I will be preaching about it on Sunday.  But there is another miracle that I am intrigued by and it is found it Mark 2:1 – 5:

1 A few days later, when Jesus again entered Capernaum, the people heard that he had come home. 2 They gathered in such large numbers that there was no room left, not even outside the door, and he preached the word to them. 3 Some men came, bringing to him a paralyzed man, carried by four of them. 4 Since they could not get him to Jesus because of the crowd, they made an opening in the roof above Jesus by digging through it and then lowered the mat the man was lying on. 5 When Jesus saw their faith, he said to the paralyzed man, “Son, your sins are forgiven.”

We are all amazed that Jesus can not only heal but does so in conjunction with forgiving the man of his sin.  So He not only has the power to heal but the authority to forgive sin.  Another great part of this account is the faith of the friends.  They believed for their friend and Jesus commends their faith as the impetus to healing.  Not only did they have faith but they proved their faith and they went to great extremes to get to Jesus.  Nothing would stop them.  And that is the part that intrigues me…not just their faith or their effort but the mess of the house that they made!  They tore a hole in the roof of the house and lowered their friend through that hole. I am intrigued by the owner of the house!
Having just gone through a major renovation in our house I understand what it is to have a mess in your house and have to live in it.  I appreciate the work that goes into repairs and renovations and the time it takes to get it done.  We don’t know anything of this man or his family but we know something about this roof that needed repairing.  The roofs in those days were made of grass and mud with perhaps some wooden lattice for support.  In order to get a grown man through a hole that hole had to be a pretty good size.  That means there was dirt and mud, grass and debris all over the living room floor..
The owner of that house not only had more people than his small home could hold but he now had a hole in his roof and garbage all over the floor.  With that amount of people gathered together there were bound to be some things broken in the house not to mention some holes in the walls and damage to his personal property.  It was a mixed crowd so although there may have been some believers there were probably just as many if not more unbelievers.  People who we may consider rough around the edges; people whose language and morals are not ones we generally condone.  This man allowed his family to be greatly imposed upon.  After Jesus and the boys left for the evening the house must have looked like the aftermath of a college frat house keg party.  And if it rained that night or the next things would have been that much messier.  Did anyone stay afterwards to help clean up?  Did Jesus make the disciples help put things back in order or did He make the men who carried their friend fix the hole they made?  Were people instructed to be on their best behavior because Jesus was there?  Unlikely.  The poor guy and his family allowed an enormous crowd into the privacy of their home and then had to figure out how to get things back in order when everybody left. I could just see Jesus and his twelve apostles smiling and laughing, exhausted after a long day of ministry, heading back “home” for a good nights sleep.  And the crowd was probably stoked, excited because of what they witnessed and psyched to have seen Jesus in person.  I have this picture of everyone talking, laughing, leaving the house, honking horns, hooting and hollering.  And the owner of the house just waving goodbye and turning to his wife and saying: “Lets leave this for the morning…I just hope it doesn’t rain tonight…I will run down to the hardware store and see if Joseph can help me fix that thing.”
We think we own things.  We think we own our homes…our cars…our churches.  But we don’t own anything.  One hundred years from now we won’t be laying claim to any earthly possession.  The truth is that God owns it all.  He is the owner of our homes, the owner of our churches.  It is His house.  His church.  His money.  His equipment.  He can do with it whatever He pleases.  If He wants to rip a hole in it to prove His glory…rip away.  If He wants to jam people into our homes…jam way.  If He wants to dirty our carpets and mess up our floors then mess away.  If He wants to take it from us and give it somebody else…so be it.  Sometimes, God’s work is messy.  Sometimes He wants to use our space, our time, our resources, our money to bless others.  It may be hard and it may be a mess.  But if He uses it to further His kingdom, to bless His people, to multiply His blessings then what am I worried about?  Why should I care as long as God is using it to show His love and bring Him praise.
Sometimes, God wants to make a holy mess.  Will you let Him?
What do you think?
How does this make you feel?
Shalom,
Steven