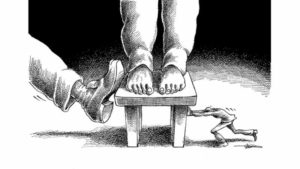 Some people view the coming election as a matter of life and death for our country.  People voting for the Democratic candidate believe that  if the Republican candidate gets voted in it will set our country back 50 years.  People who are supporting the Republican candidate fear that if “that woman” gets in our country will veer into an abyss that we may never get out of.  Those who are not voting for either candidate are just heading for the hills with a “damned if we do, damned if we don’t” attitude.  But there are some people for whom the voting on November 8th will literally be life or death and it doesn’t have to do with the presidential election.  Three states have on their ballot a vote for the upholding, altering or eradication of the death penalty:  Georgia, Nebraska and California.  For the people on death row in those states the outcome may literally mean life or death for them.
In my teens, twenties and thirties I was a proponent of Capital Punishment.  I could argue all the reasons why Capital Punishment was both good for the country and filled the need for justice.  After all, what better way to bring justice  for a crime in which you took someone’s life than to pay with your own life?  It made all the logical sense to me.  I could even find some Scripture verses to support it.  But then, something happened on my way to my forties.  I don’t know exactly what or how but my views started to change.  After being in college and arguing strongly for the death penalty in my various classes I started to question my stance.  I knew what the Old Testament said and it clearly advocated Capital Punishment in ancient Israel.  And not just for murder.  Some could argue that it actually highlights God’s value of human life and that to murder is in no way acceptable or condoned.   But I had a hard time seeing the condoning of Capital Punishment in the New Testament.  Most of the epistles are quiet with the exception of Paul alluding to it in Romans 13 howbeit in reference to earthly governments and not necessarily God’s law.  (Read Romans 13 :4 and try to reconcile dictators and madmen like Adolf Hitler with the words “They are God’s servants, agents of wrath to bring God’s punishment”.)   Jesus Himself seemed opposed to Capital Punishment.  What was His instruction to the crowd who were going to stone the woman caught in adultery (an offense punishable by death according to the Old Testament law.)? “The one without sin should throw the first stone.”  And His response to the woman after they all dropped their stones and walked away:  “Neither do I condemn you.”  I also thought back to Cain, the first murderer and God’s response to him.  Did He take his life?  Did He command that he pay for his murder with the losing of his own life?  Did he instruct that Cain be sought out and hanged, stoned or given a lethal injection?  The answer of course is no, no, no.  Instead, God gave him a consequence infused with grace:  “But the Lord said to him: “Anyone who kills Cain will suffer vengeance seven times over.” Then the Lord put a mark on Cain so that no one who found him would kill him.  “So Cain went out from the Lord’s presence and lived in the land of Nod, east of Eden.” (Genesis 4:15 – 16).  Not only that  but Cain goes on to have children and build a city. And of course we remember Jesus’s words when He is brutally murdered:  “Father forgive them for they do not know what they are doing.”
This topic brings up a lot of different emotions. Some people might call me a bleeding heart or a pacifist (“Sticks and stones may break my bones…”).  You might tell me that if I was standing in the shoes of family members who were the victims of murder I would feel differently.  Perhaps you are right.  I totally understand how someone would be in favor of the death penalty on a purely emotional level.  Forget the statistics about deterrence or financial costs to the state and country because you don’t have to convince me that Capital Punishment feels right.  Sometimes, in some cases, I think I could give the injection myself.  But beyond the emotion of it I wonder how Christian it is.  I wonder if Jesus would be holding placards in support of the death penalty or pulling the voting lever in favor of it.  The more I contemplate this very difficult issue the more I find myself landing on the side of outlawing the death penalty all together.  Somehow, every life seems to have some value to it.  I am becoming pro life in a more extensive way.  I thank God that Saul of Tarsus, a well known murderer to the early Christian believers, was permitted to live.  Maybe there is someone sitting on death row who can have the same conversion experience as Saul of Tarsus.  God is, after all, the God of the impossible.  The voters in Georgia, Nebraska and California will be making a life or death decision.
What do you think?  How does it make you feel?
Blessings,
Steven