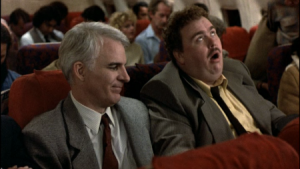 Have you ever listened to someone tell you a story and you were left wondering “What exactly is the point?”  They talk on and on and at the end you are left with a dumbfounded expression that says:  “I have no idea what you are talking about.” There is a funny moment in the movie Planes, Trains and Automobiles when Steve Martin (Neil Page) has had enough of John Candy’s (Del Griffith) constant talking and mishaps and finally blows his top:
“You know everything is not an anecdote. You have to discriminate. You choose things that are funny or mildly amusing or interesting. You’re a miracle! Your stories have NONE of that. They’re not even amusing ACCIDENTALLY! ” I could tolerate any insurance seminar. For days I could sit there and listen to them go on and on with a big smile on my face. They’d say, “How can you stand it?” I’d say, “‘Cause I’ve been with Del Griffith. I can take ANYTHING.” You know what they’d say? They’d say, “I know what you mean. The shower curtain ring guy. Woah.” It’s like going on a date with a Chatty Cathy doll. I expect you have a little string on your chest, you know, that I pull out and have to snap back. Except I wouldn’t pull it out and snap it back – you would. Agh! Agh! Agh! Agh! And by the way, you know, when you’re telling these little stories? Here’s a good idea – have a POINT. It makes it SO much more interesting for the listener!
Wow!  That was rough!  Poor Del, he was just being…Del!  And by the end of the movie, being Del was much better than being Neil.  (Warning:  If you have not seen the movie and decide to rent it you better mute the car rental scene!)
There are times that I read the Bible and I am not sure exactly what it is trying to say.  I read Leviticus or Deuteronomy or Daniel or Ezekiel or Revelation and at times I have that Neil Page reaction:  “Have a point..It makes is SO much more interesting for the reader!”  There are some things that Jesus says and I’m not quite clear where He is going with it.  But I am not alone. After an intense dream Daniel said “I, Daniel, was worn out. I lay exhausted for several days. Then I got up and went about the king’s business. I was appalled by the vision; it was beyond understanding” (Daniel 8:27).  Peter wrote about the Apostle Paul: “Just as our dear brother Paul also wrote you with the wisdom that God gave him.  He writes the same way in all his letters, speaking in them of these matters. His letters contain some things that are hard to understand”  (2 Peter 3:15 – 16).  Even the closest disciples of Jesus, His apostles, had trouble processing what Jesus taught: “Then Jesus said to them, “Don’t you understand this parable? How then will you understand any parable?” (Mark4:13).
Sometimes, I just don’t get it.  No matter how much I study or how many commentaries I read.  I use to think there was either something wrong with me or that God had trouble making His point and being clear.  But I have learned that I am neither dull (at least I am not most of the time) nor is God pointless. Some things are not as black and white as I would like them to be.  Some things take more time to digest and to ponder.  In fact, I find that most of the things in the Bible, even when I have read them what seems like hundreds of times, have more to say to me than first meets the eye.  And when I sit in my Life Transformation Group and hear the other guys sharing about what they got from a particular Scripture I realize that there is more than one way to see something or that there is more there than I previously thought.
Jesus was a master story teller.  And part of His mastery was that He did not explain or expound on everything.  Sometimes all He taught were parables and stories:  “He did not say anything to them without using a parable” (Mark 4:34). He did not use three point sermons, Power Points, numonic devices or catchy, culturally relevant or creative titles like “Seven Habits of Highly Effective Disciples.”  He did not always explain or dig deeper into the Scripture.  He didn’t take out the Old Testament and present charts or explain the Greek words of the soon to be written New Testament.  He simply told stories and invited people to find their way into the story.  Because from Genesis to Revelation is the unfolding story of God or as W. Graham Scroggie famously wrote, The Unfolding Drama Of Redemption.  And we are part of that story and God invites us to see ourselves with Him in His-Story.
Even when it doesn’t seem like there is a point.
Or we don’t understand.
Or we feel like Neil Page listening to Del Griffith.
God invites us to discover the points.  To listen to Him and receive what He wants to tell us.  But it requires us to listen and ponder, to stop and receive.  Although there may be some people who have a hard time telling stories that have a point, God’s story always has a point. Sometimes we will get it and sometimes we may not  Sometimes it is the right time for us to hear it and sometimes it is not.  But He speaks to us…through the Scripture, through the Spirit, in our hearts, through nature, in fellowship , during Communion, in the preached Word, in worship, through children, in silence and solitude,  in painful suffering, during work and while at play and in a thousand other ways.  And it is never pointless.
What do you think?
How does it make you feel?

Note: I am actually interested in hearing what you think and feel. Your responses are appreciated. And they are private. So feel free to respond with your thoughts and your own reflections to What Do You Think?